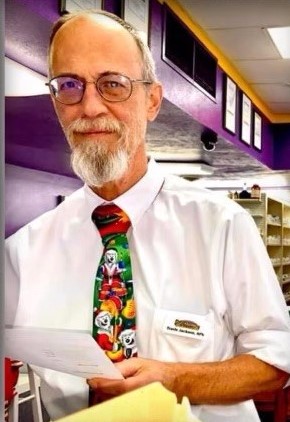 Lawrence Travis Jackson passed away January 16, 2022 at Clements Hospital UTSW in Dallas, Texas, after losing his battle with cancer. Travis was born in Dalton, Nebraska October 28, 1959 to William and Jeanette (Freudenberg) Jackson.

Travis graduated from Columbus Nebraska High School in 1978 and from Southwestern Oklahoma State University in Weatherford, Oklahoma with a degree in Pharmacy in 1984. He married Brenda Vaught in Elk City Oklahoma March 23, 1985. They had one daughter, Leslie.

Travis practiced pharmacy in the Arlington, Texas area from 1984 to the time of his death. He had a reputation of being a “workhorse” with great integrity and worked diligently to reduce the abuse of legal drugs and the prevalence of illegal drugs infiltrating the local high schools. One of his workplace quotes is: “If you are not willing to work for something, do not complain about not getting it.”

Travis was an avid sports fan. He especially enjoyed following his daughter, Leslie, across the nation (including Puerto Rico) as she played high school, college, and club volleyball and later when she became a high school and club volleyball coach. Travis resided in Texas but remained a loyal Nebraska Husker fan. He had a room in his home dedicated to “all things Husker.” When not at work, he usually wore only “Husker gear.”

Travis is remembered by his family and friends for his wit, humor, storytelling, and spontaneous personality. It was a delight to be in his presence. He was an intense competitor with the attitude that if something is worth doing, it is worth doing well. He lived a full, interesting life that he described as “living 183 years in the 62 years” he was on this earth. He will be greatly missed by all who had the privilege of knowing him.

A Celebration of Life will be held at Wade Funeral Home, Arlington, Texas, at 2:00 February 12, 2022. Please wear red to honor a true Husker fan. Memorials will be directed by the family.