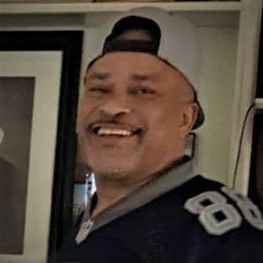 Funeral Service: 10 a.m. Saturday, February 19, at Wade Family Funeral Home Chapel, 4140 W. Pioneer Parkway, Arlington. Visitation: 9-10 a.m Saturday prior to the service at the funeral home. In Memory of Tony the family has requested to wear Dallas Cowboys Gear or Color.
Memorials: In lieu of flowers, memorial gifts may be made to the Arlington Optimist Club.

Tony was born April 8, 1961 in Bristol, Pennsylvania. After graduating from high school Tony joined the U.S. Coast Guard and served as an electrician, boarding officer, and search and rescue operations throughout the Northeast and Puerto Rico. In 1990, Tony married the love of his life Leigh and the two went on to have three beautiful children that included two daughters, Nina and Maya and one son, Jake. After twenty years of service Tony retired from the military as a Petty Officer First Class and proceeded onto a career as a commercial electrician with Fox Electric and Cummings Electric in Arlington, Texas. After retiring from the electrical trade Tony sought out a security position at AT&T Stadium, the home of his beloved Dallas Cowboys, which he truly enjoyed.

Tony developed lifelong memories and friendships through the Arlington Optimist Club where
he coached his son and multiple other youth football teams over several years. He had a huge impact on his teams serving as a mentor and role model to the boys he led and loved like his own, even following their successes as they moved onto high school and college.

In 2021, Tony was beyond thrilled to become a grandfather and fully embraced the role. The joy and happiness of the two together was nothing short of magical.

Tony was a loving husband of thirty-one years to his wife Leigh, a devoted father to his children, and a friend to so many. He will be missed dearly by all that knew and loved him.