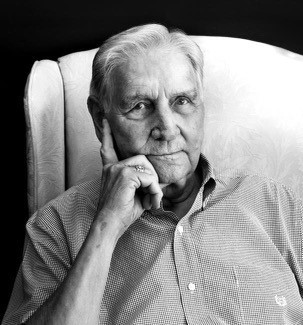 Tommy was born 17-JAN-1930 in Henrietta, Texas (Clay County) to Thomas C. Hammonds and Birdie Ann Hammonds. That day was the coldest or highest snowfall day recorded in Texas up to that time. He was the youngest of ten children. From and early age Tom would be picking cotton, plowing fields or even digging a septic tank with his sisters. After retiring from farm/ranching the family moved to Denton, Texas in 1943. His father always thought he had too much time on his hands so Tom worked 3 jobs and built his families house by himself.

He graduated from Denton High School in Denton, Texas and joined the U.S. Navy after graduation. His service occurred aboard the USS Maury geological survey ship surveying the Persian Gulf for 2.5 years. Afterward, he served on a sub chaser in Key West, FL, for 1.5 years, teaching naval officers how to locate submarines and chase them in deep water. Tom always said that he joined the Navy to see the world, so he found many ways to do as little Navy work as he could. You need to hear the stories.

After the Navy, on 2-JUN-1952 Tommy married Josephine Davis in Ardmore, Oklahoma. They had three children in the coming years. (JoAnne, Mary and Thomas)

Tommy attended the University of Texas for two years. Beginning in 1954 he went to work as a salesman for Earle M. Jorgensen Steel. In 1958 he moved to McCormick Steel Co in sales and as a sales manager. In 1963 he and three other management officers started a new company in Dallas that they named Metals and Tubes, Inc. This firm grew by buying or merging with five other companies and later became the largest metal distribution company in the nation. He worked as a sales manager, general manager, and regional vice president of Whittaker Metals Inc.

After 39 years in the metal business he retired in 1992 and lived in Dallas and Lewisville, Texas. In 1997 he moved to Falconhead Golf Resort near Marietta, Oklahoma. During this time he met and married Lora Irene Warren 15-SEP-2001. When his beloved Lora passed away 15-JUN-2015, he moved to Arlington, Texas. Never doubt that Tom lived a full life. Ask his children and grandchildren. They know all the stories.

Tom had many hobbies including golf, car restoration and the collecting and restoring of antique fans and telephones.

Instead of flowers, the family asks that donations should be made to the Texas Masonic Retirement Home in Arlington, http://www.txmrc.org, 817-275-2893.