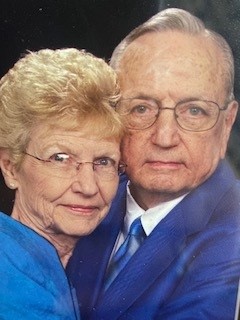 Sandra Kay Fry was born Sandra Kay Cooper on May 11, 1940, in Cooper, Texas, the only child of John Everett Cooper and Gertha Fay Bates Cooper. She married Herbert Clark Fry on November 7, 1958, in Dallas, Texas. They were married 50 beautiful years until his death in 2009. They had one daughter Shelly Kay, who they raised in San Antonio, Texas. They relocated to Arlington, Texas in 1996 to be closer to Shelly and her husband, Bob, and their children. She went to be with her Lord on August 11, 2022, at the age of 82.

She lived a full life and loved and was loved by many. While her immediate family was small, she had so many friends who were family that spanned decades. She was very active in Al-Anon her entire adult life and was an active member of Most Blessed Sacrament Catholic Church, Arlington.

She is preceded in death by her parents, Everett and Gertha Cooper, and her husband, Herb Fry. She is survived by her daughter Shelly Christenson and husband Bob, her four grandchildren Cody Farrow and wife Sara, Alexandra Allen and husband Chris, Eric Christenson, and Lillian Conrad and husband Mark, as well as great grandson Hayden Clark Farrow, and niece, Patti Fry.