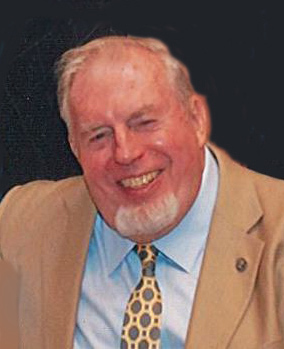 ARLINGTON -- Robert Bruce Warfield Hook, 82, a true gentleman and beloved husband, father and grandfather, died peacefully on Saturday, April 5, 2014, surrounded by his family. Funeral: 3 p.m. Tuesday at Wade Funeral Family Home, 4140 W. Pioneer Parkway, Arlington. Interment: 6 p.m. Tuesday in Farmersville Cemetery, Farmersville. Visitation: 2:15 p.m. Tuesday. Memorials: In lieu of flowers, memorial gifts may be given to the local Boy Scout troops at Grace Presbyterian Church, or the YMCA on Cooper Street in Arlington. Bruce was born in Buffalo, N.Y., and started working at a very young age delivering prescriptions by bike for the local drugstore. He earned both his bachelor's and master's degrees in pharmacology at Columbia University prior to serving in the Air Force. He was a member of Kappa Psi pharmacology fraternity and elected to Sigma Xi. Serving in the Air Force as an officer, he taught at Lackland Airbase and Gunter Airbase in Montgomery, Ala. While in the service, he married the love of his life, Janice, and left shortly afterward to teach at Columbia University. The demands of a growing family led him to work in the pharmaceutical industry developing new drugs and new process development at Lederle Laboratories, Sterling Winthrop Research Institute, and Alcon Laboratories in Fort Worth. His interest turned to solar energy and he retrained himself as an independent consultant and then worked with the Tennesee Valley Authority on solar engineering for homes. As he neared retirement, he returned to his retail pharmacy roots, working in Chattanooga, Tenn. Bruce was a licensed pharmacist in several states, including Texas. Bruce loved spending time with his family. He was an excellent dancer and even danced a soft shoe for his daughter a few weeks before his passing. He was an active swimmer and sailor in his younger years, teaching these skills to many youngsters. He was an avid supporter of his children's and grandchildren's scouting activities and taught their early Sunday school classes. Later in life, he enjoyed playing with his grandchildren, and as they grew to adults, occasionally sitting on the back porch in the evening, enjoying a cool drink and a cigar with them. He was a voracious reader, a lifetime student of science and history, and relaxed by painting and woodworking, and taught the same to his grandchildren. He loved the railroad and enjoyed his collection of model trains. He was preceded in death by his grandson, Britt Walker; his parents; one brother; and one sister. Survivors: Bruce is survived by his beloved wife of 55 years, Janice "Jan" S. Hook; his children, Bruce David Hook (Karen), Cathleen Susan Fusco, Patricia Elizabeth Walker (Michael), Christopher Andrew Hook (Ann); grandchildren, Marguerite, David (BJ), Daniel, Sarah, Brian, Amanda, Jessica and Emily; great-granddaughter, Kathryn; his sister, Marilyn Williams; nieces; and nephews. Wade Family Funeral Home Arlington, 817-274-9233