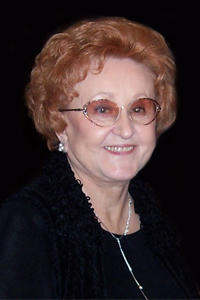 Nadine Bradshaw, 80, passed away Friday, October 24, 2014 in the home of her daughter, Pamela Brocato. By her bedside were daughter Pamela, brother David and sister-in-law Katherine. Honoring her wishes she will be cremated and the memorial service will be held in celebration of her life. Any personal memorials given in her name should be directed to local humane societies or Zion Lutheran Church in Vernon Texas. She was born Nadine Alma Sanders in Vernon, Texas on December 4, 1933. At a young age became the guardian of her sister and brothers. She would watch them and sewed for them and was the best big sister. Until her death, she remained a constant in their lives, remembering their birthdays and holidays and being someone they could always rely on. Before her illness, she was very adventurous. As a mother she often took her daughter to Mexico while she was growing up. She always made sure that her daughter saw the major cities in the nationwide, and later with her granddaughters showing them the national parks...sometimes bringing home a wild critter as a pet. She loved nature and enjoyed the deer that came into her yard in Horseshoe Bay. One of her last wishes was to have her great granddaughter see her deer, because Ady's first sentence was, "I like deers". She loved plants. She could grow anything, from a garden or a greenhouse, and had many household plants. For many years she would go to the Colorado to see and photograph the Aspen trees turning colors and her photography was wonderful. After every vacation or adventure an entire album was created along with special notes and captions on each page. She was a master seamstress and at an early age sewed wedding gowns that were hand beaded and made all her daughter's dresses. Later she made her granddaughter Ashley's Junior High dance dress and other granddaughter Deanne's communion dress. She even made little blankets for the pets. She had style and decorum and made sure everything was "just right". Nadine was a great cook she prepared every meal special and always used cloth napkins. Everyone will miss her german pancakes. She was proud of her heritage and family, her nieces and nephews, her granddaughter Deannes' family, Matt and Adelyn. She was proud and happy for granddaughter Ashley's engagement to Kevin Nehl and her extended family Ralph, Kathy, Rachel and Phil. Her wish is that everyone stay in touch She was a devoted daughter and took care of her parents when they needed her. She brought her mother into her home until her death. Survivors: Daughter, Pamela Brocato, granddaughters Deanne and Ashley Brocato, great-granddaughter Adelyn Feurer and brother David Sanders.