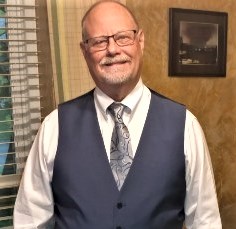 Michael was born on May 23, 1955 in Fort Worth, TX, to Hazel Cook.
Michael graduated from JJ Pearce High School, Richardson, TX in 1973 and went on to earn an Associates degree from Eastland College.

His work history was varied, beginning with three years at Camp Courageous of Iowa, 1978-1981. After moving to Portland OR, he worked at Oregon Episcopal School, 1981-1994. In Fort Worth, he worked for Jetta Operating Company from 1995-2019, when he retired

Michael married Christine Cook in 1989. The couple had no children.

Michael was best known for his kind and giving spirit and his ready laugh. He loved camping, canoeing, reading.

Michael is preceded in death by his father, Robert Cook, his grandparents, Lucille and AB Cecil and Olene Franklin,

Memorial donations can be made in Michael’s name to Camp Courageous of Iowa or Sagamore Baptist Church.