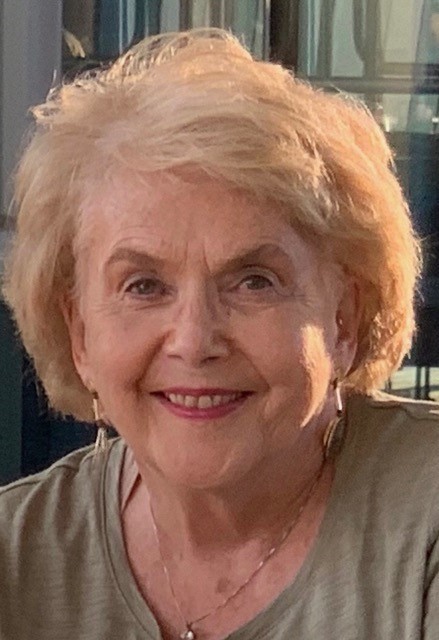 Mary Ellen Miller October 29, 1942 – October 29, 2020 VISITATION: Tuesday, November 10, 2020 from 6-8 pm at Wade Family Funeral Home SERVICE: Wednesday, November 11, 2020 at 11:00 am at Wade Family Funeral Home. The service will be live-streamed for those who wish to attend the service virtually. Immediately following, a graveside service and burial at Emerald Hills Memorial Park. Mary Ellen (Robinson) Miller of Arlington, TX passed away on her 78th birthday, October 29, 2020, after a brief illness. She was born October 29, 1942 to Connie and Tom Robinson in Plattsburgh, New York. Both her older sister, Barbara, and younger sister, Claire, recall that Mary Ellen was popular with everyone and had a terrific gaggle of friends and girlfriends by her side her entire life. After high school, Mary Ellen attended Laselle University in Boston. After graduation, she headed to New York City where she studied at the Katharine Gibbs School. She lived in the famous Barbizon Hotel, which, at the time in the early 60s, was a women-only, elite “fortress” for single women and began her career at Brides Magazine as executive secretary to the Editor. The course of Mary Ellen's life took a serendipitous turn at a launch party for 100 Pipers Scotch at the St. Regis Hotel when a dashing young man with jet-black hair and glasses to match spotted her across the room. That young man was J. Miller, a brand reporter for Advertising Age from Syracuse, Kansas, who was smitten from the start. They married the following year on December 10, 1966 in New York City at Central Presbyterian Church. J. surprised his new bride with a brand-new white 1966 Mustang with black convertible top and red interior – the perfect way to start their 53-year-long love story. The first stop was Chicago where J. continued to work for Advertising Age and Mary Ellen took an administrative job at the advertising agency Foote, Cone & Belding. Their daughter, Jennifer, was born in June of '68. From there, the young Miller family settled in Denver, where they welcomed their second daughter, Kelly, in October 1970. Kelly was born with medical challenges and doctors said her outcome looked grim. Mary Ellen wasn't having any of that talk and went to battle for her daughter, searching for doctors and surgeons who believed in the value and hope of her daughter's life, like she did. Mary Ellen's mama bear spirit was so indicative of the type of woman she was – loyal and fierce, when necessary. After six years in Denver, the Miller family resided briefly in Oceanside, CA, settling in Carlsbad, CA until 1978. J's printing service business relocated the nomadic Millers to Arlington, TX, where they settled for good. Over several years, Mary Ellen worked for Red Carpet Realtors, Herman Boswell Realtors, Thrifty Nickel Classifieds, and with her husband until her retirement in 2013. Mary Ellen loved many but none as much as her three biggest joys – her grandchildren, Meg, Bo, and Elle. Known as “Lulu”, she had such a special connection with each one, introducing Meg to her love of Broadway, talking baseball with Bo, and baking chocolate chip cookies with Elle. She and J. shared their enthusiasm for Ranger baseball with the kids, taking them to numerous games. Lulu was her grandkids' biggest – and most vocal -- cheerleader at their various sports games, dance recitals, and theater shows. They always knew when Lulu was there. She was such a bright, indelible light in their lives. An active member of First Presbyterian Church, Arlington for over 40 years, Mary Ellen served as deacon and on several committees. She and J. found their “second” family with their Sunday School class, which began class together as parents of teenagers and who have stayed together through the years -- doing life together. Everyone who knew her agrees that she was the life of the party – a life that will be missed immensely. Mary Ellen is preceded in death by her husband, J. Fred Miller, who passed away in July this year, and her mother and father. Mary Ellen is survived by her daughter Jennifer Miller Espey and husband Lin Espey; daughter Kelly Robinson Miller; sister Barbara Ellen Robinson White; sister Claire Ellen Pocock and her husband Steve; grandchildren Meg, Bo, and Elle Espey; nieces Kim White Ferreira, Kate Pocock, and Charissa Miller; nephews Chris White, TJ Pocock, Alex Pocock, and Aaron Miller. Wade Family Funeral Home (817) 274-9233