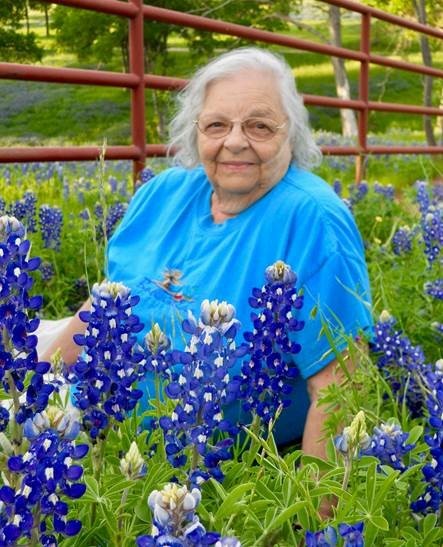 Mary Aileen Belken was born in Fort Worth, Texas October 4, 1933 to Joseph Aaron Sr. and Anne Laurie Rice. Preferred to be known as Aileen, she was the youngest of three brothers, Joseph, David and Gene. When she was a baby, she and her family moved to Dallas to start a farm. On the farm, they raised chickens and cows, then sold the milk which Aileen would deliver to neighborhood homes. Christmas was her favorite time growing up, with the family mostly exchanging homemade gifts. She liked to play with dolls and one Christmas Dad and the brothers made her a knotty pine rocking doll bed she loved and she kept it for a long time. Her first store-bought gift was a doll, given to her by her mother's sister Ethyl. When Aileen was 11 years old, her eldest brother Joe joined the Air Force and she and her family made an effort to help with war effort by saving their tin foil and tin balls. After Aileen entered junior high school, she and her family moved across town. However, they did not live there for very long due to a fire that burned the house down when she was 13 years old. They moved next door to a Baptist church and Aileen would spend most of her free time at the church. Aileen was a proficient piano player and often played at the church. Aileen graduated in 1951 from North Dallas High School. In her senior year, she met Raymond on a blind date. Raymond would go to great lengths to see Aileen, taking long commutes with buses and anyway he could get to visit her from his residence in North Dallas, even once missing his bus ride and having to walk the entire way back home. Raymond and Aileen were married November 15, 1951 when he was only 20 years old and she was 18 years old. Raymond then joined the Naval Air Reserves during the Korean war and shortly after they moved to San Diego, California where they lived at the base on the beach. Aileen became pregnant and they felt it was best for her to move close to her family in Dallas. Their first child, Mark, was born on March 26th, 1954. When Mark was 9 months old, Raymond was released from the navy and came back to Dallas. Twelve years later, they adopted Millie when she was only 3 days old from Hope Cottage Orphanage. Five years later, they adopted Michelle. In 1978, Mark married Donna and Raymond took a job overseas in the Sahara Desert in Algeria. They sold their house in Arlington and most of their belongings and moved to Palma de Mallorca, Spain. Raymond would work for two weeks and then come home for a week. Millie and Michelle attended Belares International School, an International boarding school. In Mallorca, Aileen and the girls had a lot of adventures touring around the island and visiting historic places, such as Bellver Castle, the 16th century Cathedral of Santa Maria in the heart of Mallorca, the white sand beaches of Magaluf and the taking a train to into the mountains. In 1983, they moved back to the United States to Galveston, Texas and lived on Tiki Island. There, they had a canal of the Gulf of Mexico in their backyard and fished with a net for fresh fish, crabs and shrimp. Even surviving a hurricane during the first week that she, Millie and Michelle arrived. Later, they moved back to Arlington, Texas and bought their home on Bowen Court. Raymond worked for Citgo and, later, Aileen started a working again at temp agencies and eventually held a position as an Executive Secretary with Ozarka Drinking Water, retiring there after 15 years. Aileen was blessed with grandchildren, Megan, daughter of Mark and Donna in 1984. In 1988, Derek, son of Mark and Donna, was born. In 1989, Michelle married Majed Saleh and in 1990, Majed and Michelle Saleh, had Kareya. In 1995, Millie and Kevin had Kealton. Raymond became ill with prostate cancer, but always made every effort to do things for Aileen, because she was his one true love, including taking her and Mark, Donna and their kids on a cruise trip in 2000 even when he was very ill - saying it was “the best vacation ever”. Aileen was blessed with 2 great-grandchildren. Alexa born in 2007 joined the Belken family when Derek and Felicia married in 2017. Kelton gave birth to Link in 2019. Aileen spent the last years of her life in a duplex purchased by Mark and Donna, living next door to her grandson Derek and his wife Felicia and a few minutes from her son Mark and daughter-in-law, Donna. Donna and Mark took care of Aileen, even up to her last days, taking her on many trips she enjoyed with her family. Preceded in death by: Daughter of Joseph and Anne Rice. Married November 15th, 1951. Wife of Raymond Joseph Belken, deceased December 8th, 2000; brother, Joe Jr. and wife, Nancy; brother, David and wife, Genieva. Survived by: Mother of Mark and wife, Donna Belken, Michelle Belken and Millie Belken. Grandmother of Megan and husband Boomer Phillips, Derek and wife, Felicia Belken, Kareya Saleh and husband, Dennis Hul and Kealton Belken. Great-grandmother of Link King and Alexia Orologio. Brother Gene Rice and wife Loretta, and nieces and nephews. Wade Family Funeral Home & Crematory 817-274-9233