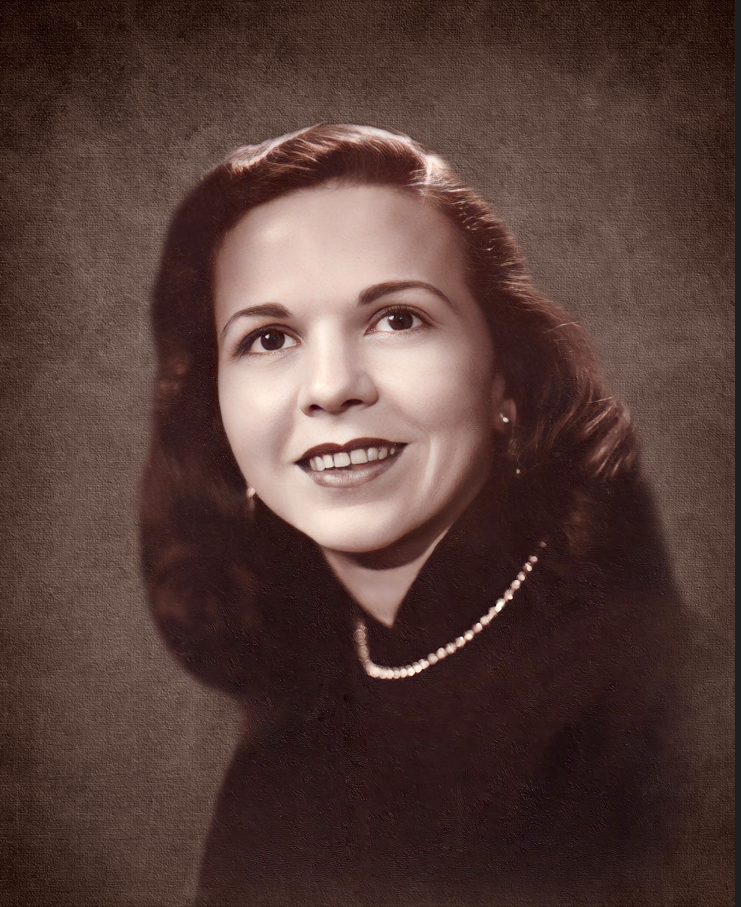 Margaret Lou Red Mueller was born in Mabelvale, Otter Township, Arkansas, on May 14, 1925. She was the seventh in birth order and the last surviving child of ten siblings from the union of Walter Burns Red and Zelia Augusta Grissom. She passed away on September 11, 2022 at the age of 97. Her husband, Eugene “Gene” Herman Mueller Jr., predeceases Margaret. She is survived by her three children- Eugene “Butch” Mueller III, Lisa Mueller Weihmuller (husband Lance Weihmuller Sr.), and Kelly Mueller Smith (husband Robert Hines)-and four grandchildren-Lance Weihmuller II, Amon Weihmuller, Jonah Smith (fiancé Haley Parsa), and Margaret Smith. Many nieces and nephews living in Arkansas and California also survive her. Extended family and friends include Jon Paul and Kim Smith and their children Kaia, Matilda, and Lucille Smith. A memorial service will be held at 10:00 AM, Saturday, October 22, 2022 at Wade Family Funeral Home in Arlington, Texas.

Margaret was a lifelong member of First Baptist Church in Arlington. She was also a member of the Olive Hill Cemetery Association in Mabelvale, where many of her family are buried. Her ashes will be buried alongside her husband in the Mueller family plot at the Oakland and Fraternal Historical Cemetery and Park in Little Rock, Arkansas, at a later date.

In Mabelvale, Margaret’s parents often had to make do as Margaret grew up, but the family had much love to share between them. There in Arkansas Margaret attended first grade through twelfth grade, graduating from high school with the same small-town classmates she had first met twelve years prior. After graduation, she moved to Little Rock to live with her older sister Mildred. Margaret married Gene Mueller on January 18, 1947, in Little Rock, Arkansas. She had met Gene, an Air Force pilot, while crossing the street outside the bank where she worked. Margaret left behind the job as a bank teller to take on new roles as a homemaker and an officer’s wife, titles in which she took great pride. Eleven months later in that same year, she took on another title that forever changed her life-mother-with the birth of her first child Eugene “Butch” in Little Rock.

Soon thereafter, Margaret and her young family would have to move eleven times in fifteen months while in base housing, a figure she recounted with exasperation as well as pride. Some of these reassignments included Travis AFB, Corte Madera, California; Luke AFB, Phoenix, Arizona; and Hamilton Field, Marin County, California where, in 1957, they welcomed their second child, a daughter named Lisa. Margaret acknowledged it was both a blessing and a sacrifice to live in base housing. While Gene would be stationed overseas, Margaret stayed stateside and kept their home and children well cared for. In 1961, the family moved to Ft. Walton Beach, Florida, when Gene was stationed at Eglin AFB. Margaret would later tell stories about how Gene would then fly over the house, as she would run to the backyard waving in the air for him to see. During these years in Florida, her son Eugene, a flourishing teenage musician, whose saxophone Margaret loved listening to on days after school, often filled the house with music. In 1964, Margaret gave birth to her youngest child Kelly, rounding out the family.

Upon Gene’s retirement from the Air Force, they first moved to Louisiana where the family endured Hurricane Betsy in 1965. After that, it was not long before Gene and Margaret decided Texas provided a much better opportunity. In 1966, they moved to the Woodland West neighborhood in Arlington, Texas, where Margaret lived for the rest of her life. In 1978, Margaret became widowed, yet she persevered in her duties as a single parent and homemaker. Her home became a base for family for years to come. It was the rendezvous point for every holiday and family gathering, for friends and extended family alike. It was a warm shelter for retreat and a place of security. It was somewhere to go and be provided for.

Despite the loss of her husband, Margaret never failed to show up as the parent to her children. She attended all of her children’s personal interests and extracurricular pursuits. Over decades, she was present for cheerleading practices, dancing recitals, luncheons, musical performances, birthdays, school award ceremonies, weddings, graduations, and sporting competitions. She was a devoted matriarch with a beautiful smile and a generous heart.

Margaret was an accomplished seamstress, sewing Gene’s shirts, altering his uniforms, making her children’s and grandchildren’s clothes and dresses, in addition to quilts, curtains, and comforters. Margaret served as a costume maker at Buddy Harris School of Dance where Kelly learned tap, ballet and jazz. Even at the age of 97, she was proud to still be able to thread a needle without assistance. Margaret loved to read and often had several library books on her nightstand. She loved plants, flowers, and the colors red and pink, keeping a beautiful azalea garden in her backyard.

Margaret was a brilliant cook and a talented baker as well. She prepared every meal for the family growing up. Dinner was served promptly at 5:45PM, and on special weekends, Margaret and Gene, before his passing, would make broiled lobster tails as a midnight snack. At family holiday gatherings her famous turkey gravy and delicious cocoon cookies were renowned staples. Her list of impressive recipes was vast, and Lisa, a homemaker herself, was a dedicated apprentice. And even though Lisa and Kelly teased her for the fried bologna she sometimes still prepared (a remnant of Margaret’s humble upbringing in Arkansas), Margaret’s legend in the kitchen persisted. Margaret’s hotcakes were her most fabled dish, a sweet comfort for breakfast, lunch, dinner, or whenever her grandkids would visit.

Although foremost a homemaker, Margaret did hold some volunteer jobs over the years. She liked to keep herself busy but, more so, to be of support to others. She worked as a Crisis Hotline volunteer, cared for babies in the church nursery and attended bible study at Pantego Bible Church, assisted at the bank where Lisa worked, and volunteered at Nu2U Resale in Arlington making lasting friendships at every place. In addition, Margaret was an active member of the Texas A&M Mothers Club at Texas A&M from where Kelly later graduated. Ever the caregiver, Margaret, in her later years, also provided for her sister Mildred.

Most of all, Margaret loved her children, grandchildren, and by extension, anyone who loved them. They were her greatest source of joy, and she supported them in every way possible. She loved to hear about each child’s activities and pursuits, asking often how she could be of help to them. Her pride filled when hearing of family members’ accomplishments. Their adventures and victories gave her joy, and even in their struggles, she cared for them tenderly and with honor.

Margaret was the mother and grandmother we needed, and with her love, we never wanted anything more. We were blessed to have her as our home base, a place where we could always find refuge, and a person who always loved and accepted us. Margaret would often remark, after Gene’s passing, that she viewed his absence as if he was TDY, military code for Temporary Duty Travel or Assignment, and that she was looking forward to the day of homecoming when they would be reunited. We are comforted in the knowledge that they are together once more. While we mourn her passing, we are held by the love she had for us.