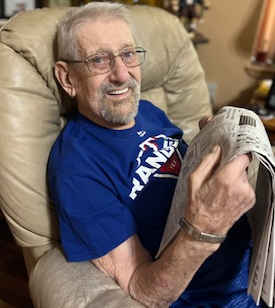 Louis served in the United Sates Army during World War II from 1944-1946, achieving the rank of Corporal.

Louis remained very active in his later years. In addition to pursuing hobbies such as reading, history, gardening and general tinkering, he volunteered his time and passions in many different areas. In his 60s and into his early 70s, Louis and his late wife Josephine made thousands of rosaries for the Catholic Ministry to Prisons. Louis was active in the Catholic Pro-Life Movement of Fort Worth and in his 70s and 80s, he volunteered to pray the rosary in Fort Worth each month for mothers to choose adoption. He was also a member of the Knights of Columbus.

In lieu of sending flowers, the family asks that you please consider a donation to the charity of your choice in memory of Louis.