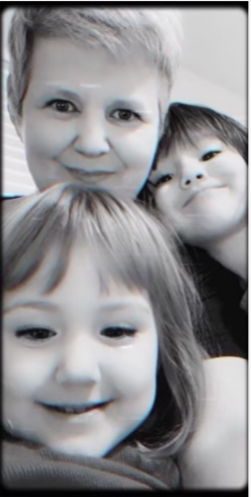 Kari was born in Ennis, TX to Hardie Lee Wood and Janice Sue Wood. They lived in Ennis for a bit and moved to Fort Worth sometime in her childhood. Eventually, she would meet her husband of 35 years, Arthur Zepeda.

Arthur and Kari were married on August 28, 1987 and had three children during their marriage. On May 12, 1989, they had their first child, Richard Zepeda. Richard has five children of his own whom Kari loved and cared for deeply. Richard has a knack for having twins…the first set of twins were girls, Katherine and Mercedes. Nikki is the third born (not a twin) and twin boys Thomas and Jonah followed. Kari loved her grandkids with all her heart. She was even more protective of those children than she was with her own, which says a lot because she was a very protective and caring mother.

Finally, on May 15, 1993, Kari had her third and last child Katherine Zepeda. Unfortunately, Katherine passed away in December of 1996, and her name is where the names of Kari’s granddaughters originated.

Kari was the type of person to be considered a mother figure when you needed one most. She was the definition of a mother. As a mother, she was protective of her children and grandchildren. There were times when she would put herself in danger to protect her family. She, indeed, was the center of the family. Not only was she a great mother but also a great friend. In times of need, she would be there and help you. You could talk to her about anything, and she will do her best to lift your spirit. She was the person you sought for help and love through tough times and easy times. She will never be forgotten, and the love she gave will be passed on to others.

A public visitation will be held for Kari on Monday, December 12 at Wade Family Funeral Home, 4140 W. Pioneer Pkwy, Arlington, TX 76013 from 6:00pm – 9:00pm. A private family graveside service and burial will be held later at Moore Memorial Gardens in Arlington, TX.