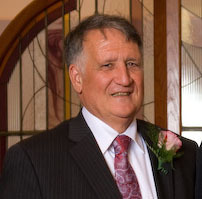 ARLINGTON -- John McDermott, 73, died suddenly Thursday, Jan. 2, 2014, in Arlington. Memorial service: 1 p.m. Saturday, Jan. 11, at Wade Family Funeral Home, 4140 W. Pioneer Parkway, Arlington. Memorials: In lieu of flowers, please make any donations to Fisher House at www.fisherhouse.org, or any charity of your choosing. John was born May 28, 1940, in New York City, received a bachelor's and MFA degrees from the University of Notre Dame in South Bend, Ind., where he worked as an architect for several years. He became a faculty member at Ohio University, moved on to Ohio State University, and in 1982 moved to the University of Texas at Arlington as director of the School of Architecture and was a professor there until his death. Survivors: His wife of 47 years, Peggy McDermott of Arlington; his son, John James McDermott III and his wife, DeAnn, and his grandson, John Connor McDermott, of El Paso; and his son, Peter Frederick McDermott of Beijing, China. Wade Family Funeral Home Arlington, 817-274-9233