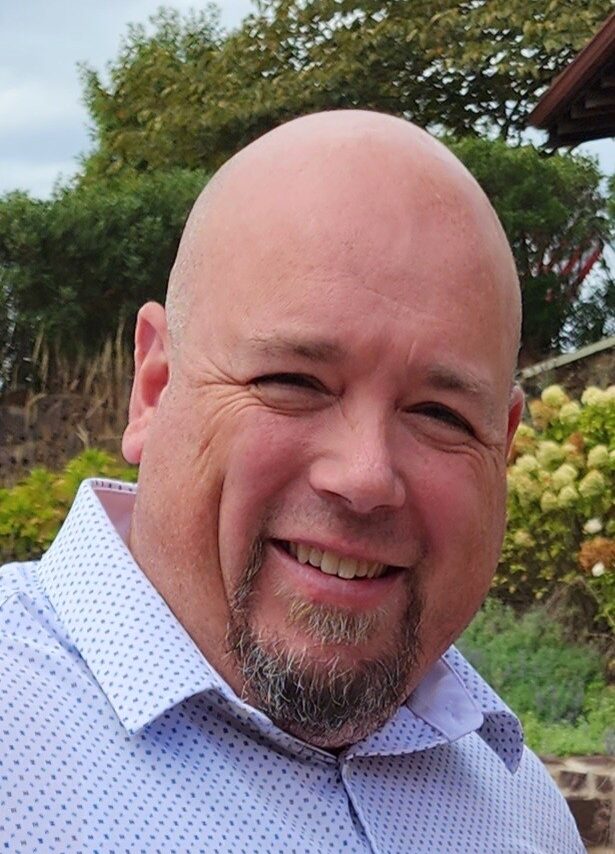 James “Jim” Edward Reigle was born on December 28, 1972, to his parents Michele Anne Chuppe and David Michael Hume in Batavia, New York. He unexpectedly passed from this earth on December 27, 2022, in Mansfield, Texas.

He spent most of his childhood in Shamokin, Pennsylvania where he graduated high school in 1992. After graduation, he moved to Colleyville, Texas to be with his family.

He started working at Dillard’s while attending college at Tarrant County Junior College (TCJC) in Hurst, Texas, where he met his wife Amanda Rae Reber in Anatomy & Physiology class in February 1994. After dating Amanda for 5 years, he proposed in November 1998 and then they married on July 10, 1999.

He worked for Dillard’s department store for 11 years from 1993 to 2004. After leaving Dillard’s in 2004, he began his career in the restaurant business at Chili’s Bar & Grill. In 2006, he was promoted to general manager for Chili’s which moved he and Amanda to Abilene, Texas for 2 years. In January 2008, Jim and Amanda started the process of fostering to adopt. On April 21, 2008, Brayden James Reigle was born. At that time, Jim was transitioning back to the metroplex to start his career with Bennigan’s. On June 30, 2008, Brayden was placed in foster care with Jim and Amanda. Shortly thereafter, Bennigan’s closed its doors and in September 2008, Jim began his 14-year career with BJ’s Restaurant & Brewhouse working in many different locations throughout the Metroplex. On May 12, 2009, their daughter Violet Elizabeth Reigle was born. 5 months after her birth, she was placed in Jim and Amanda’s care through foster placement. On November 29, 2010, their son Gavin Jacob Reigle was born. Jim and Amanda were fortunate enough to be able to bring him home straight from the hospital. On June 10, 2011 Jim and Amanda were able to formally adopt Gavin in Tarrant County and on July 8, 2011, Brayden and Violet were formally adopted in Denton County, making their family complete.

In 2013, Jim was given the opportunity to move up north to the Virginia/Washington DC area to expand BJ’s restaurants. He opened 4 restaurants as General Manager, in the area over the next 3 years before returning to Grand Prairie, Texas in 2016, where he and Amanda currently live. Over the course of his BJ’s career, Jim received many awards and recognitions. He received Top Performers Club recognition several different times, which awarded him trips with his company. The most recent recognition he received in December 2022, was breaking the highest weekly sales record in the state of Texas at his store in Arlington.
Jim enjoyed playing golf, building things out of wood, going to the movies, playing Clash of Clans, and spending time with his wife and kids.

He is survived by his loving wife of 23 years Amanda, his 3 children Brayden, Violet, and Gavin; and his 3 dogs (who were like children to him) Harley, Beau, and Bella. He is also survived by his mother Michele and stepfather; Charlie Chuppe; adopted father Rob Reigle; his biological father and stepmother David and Jane Hume; and his mother-in-law and father-in-law, Barbara and Ron Reber.
His siblings include his sister Amy Burks and her husband, Jeff; his stepsister Lisa Saidel and her husband Bart; his stepbrother Michael Chuppe and his wife Dannielle; and sister-in-law Stephanie Goertz and her husband Joe. Jim also leaves behind 6 nieces and 3 nephews along with a host of aunts, uncles, and cousins who love him very much.

Jim was loved by many friends and family members. He leaves us all with good memories and will be missed by all.