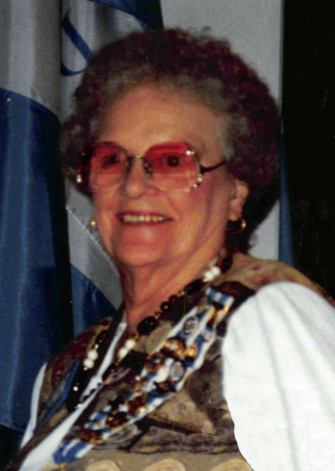 FORT WORTH -- Glenrose Batchelder Englerth, 95, beloved mother, grandmother and great-grandmother, passed away Sunday, Aug. 31, 2014, in Fort Worth. Memorial service: 11 a.m. Saturday, Sept. 27, at Wade Family Funeral Home, 4140 W. Pioneer Parkway, Arlington. Inurnment: in the Batchelder family section of Woodlawn Cemetery in Forest Park, Ill. Memorials: In lieu of flowers, if you so desire, please contribute to the Paralyzed or Disabled Veterans organizations, her favorite charities. Glenrose was born Dec. 6, 1918, in Chicago, Ill., to Frank LeRoy Batchelder and Tina Ullrich Batchelder. She was the youngest of five children, two of whom preceded her in death in infancy. She was raised and educated during the Depression era in Chicago, where she met and married her husband, Earl N. Englerth, in 1941. Shortly after marriage, she and E.N. moved to Cedar Rapids, Iowa, where E.N. worked for Collins Radio and their daughter, Penny Joy, was born. Seeking a warmer climate and a desire to prosper, they moved to McAllen in 1945. Shortly thereafter, they opened a successful electronics sales and service company and then also a background music company, where they worked side by side for many years. Their twin boys, Earl "E.J." and Verle, were born in McAllen. She did an awesome job raising all three children, supporting their club and sports activities, encouraging their educational achievements and maintaining an active role in the family businesses and real estate ventures. Glenrose always believed in giving to the community by helping others, volunteering and belonging to civic organizations. She was past president of the McAllen Business and Professional Woman's Club and Zonta Club. She was also past regent of the Rio Grande Chapter of NSDAR. Shortly after selling their businesses, retiring and planning to travel, her husband had several strokes and passed away in 1981. She then filled her remaining years in McAllen by becoming a lifetime member of the McAllen Hospital Auxiliary, managing the hospital gift shop before moving to Fort Worth in 1991. Being a person who liked to remain active and productive, in 1993, she began volunteering at the National Archives at Fort Worth, U.S. National Archives and Records Administration, where it is estimated that she helped tens of thousands of people research their lineage/heritage over a 21-year period. Glenrose currently held memberships in the Fort Worth Chapter of the National Society Daughters of the American Revolution where she was a past regent; Honorable Philip Livingston Chapter National Society Daughters of the American Colonists; Governor Thomas Hinkley Chapter National Society Colonial Dames of the XVII Century; and the Dallas-Fort Worth National Society Magna Charta Dames and Barons. She was preceded in death by her parents; her siblings; her husband; and a granddaughter, Dawn Chenoa Dale. Survivors: Daughter, Penny Dale (Joe) of McAllen; twin sons, E.J. (Judy Lynn) of Fort Worth and Verle (Carolyn) of Abilene; 10 grandchildren; and 18 great-grandchildren. Wade Family Funeral Home Arlington, 817-274-9233