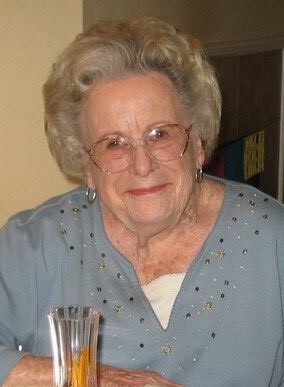 Edna Catherine Knight, 91, of Austin, Texas, passed away July 2, 2016. Memorial Service: 2:00 p.m. Saturday, July 23 in Austin, Texas, at First Baptist Church of Austin, 901 Trinity St. Memorials: In lieu of flowers, donations may be made to the Cancer Research Institute or amfAR. Edna was born January 13, 1925, to Felix W. and Edna Stanley in Cleburne, Texas. She graduated from Waco High School. Catherine grew up in Waco, and married David G. Knight in 1947. She traveled to Japan with him where he served in the Air Force during the Korean war. They lived in Houston, Biloxi, and San Antonio while he was serving in the Air Force. After his retirement in 1976, they spent many years traveling in their motor home and golfing, and finally settled in Austin. Catherine enjoyed visiting with friends and family, shopping, and eating dessert-especially Blue Bell ice cream. She loved her many dogs, all Maltese, and all called Prissy. But her greatest joy came from being with family: her children, and especially her grandchildren and great-grandchildren. She was called Nannie and loved by all of them. Her sisters were her best friends. Nieces and nephews knew her as Khaki, and she always kept up with their lives as well. Everyone who knew her remembers her for her caring and warmth. Catherine is predeceased by her husband, David Knight; son, Paul S. Knight; brother, Felix Stanley; and sister, Jean Hatley. Survivors: She is survived by her daughter & son-in-law, Deborah & Gerald Zeringue; son & daughter-in-law, David and Cindi Knight; grandchildren, Amelia Miller and her husband Mike; Sarah Zeringue; Sean C. Knight & his wife Jennifer; Kati McNeil and her husband Ron; and great-grandchildren, Harmon and Vivienne, CJ, Dakota, and Jakob; sisters, Joanne Harrell and Pat Hall; and many nephews and nieces. Wade Family Funeral Home Arlington, 817-274-9233