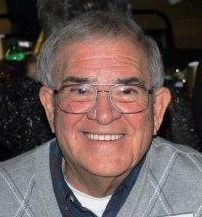 Donald Eugene Woodard Born December 28-1937 in Crockett, Texas Died June 16-2016 in Fort Worth, Texas Don was the son of John William and Bessie Catherine Turner Woodard. Don passed away suddenly on Thursday June 16, 2016 at Plaza Medical Center in Fort Worth, Texas at the age of 78 years, 6 months and 12 days old. He was preceded in death by his parents, John William (Johnny) and Catherine Woodard and his sister Louise Woodard Maddux. Don is survived by his loving wife of 58 years, Helen; daughters Donna (Woodard) Mann and husband Rick, and Deon (Woodard) George; Grandchildren; Jeffrey Mann and fiancée' Angela Hathorn, Tiffany (Mann) Nolte and husband James, and Hailee George; Great Grandchildren; Shane and Cooper Nolte. Two nieces: Debbie (Maddux) Southard and Cindy (Maddux) Taylor and husband Jeff. Don never met a stranger and always had a smile on his face and a cup of coffee in his hand (which he often left around where ever he was). He worked 40 years and many LONG hours at General Electric Company in Dallas, Texas and retired in 1995. When he wasn't hard at work, he enjoyed (and was very successful at) coaching girls softball. Don was well respected in the softball world and impacted the lives of many girls that were privileged enough to play on his team. After a 5-way bypass surgery in 1995, his enjoyment of travel and many adventures began. Starting with a 15' Mobile Scout Trailer (which had no heat, air or bathroom) many happy camping trips were taken. From pulling over to sleep in a Rest Area to camping beside the mountain streams in Red River, there was always fun. After several years of thinking that “boating” would be more fun, they came back to camping with a 32' Travel Trailer; from that, was the 5th Wheels, and after the girls were out of the house the “Motorhome” appeared! Don and Helen loved to go in the Motorhome all over the country. The only state that was missed was Hawaii- only because you can't drive there! After joining the Good Neighbor Sams, Don and Helen decided to run for Texas State Directors. The state of Texas and their Family would never be the same again. Don and Helen served as State Directors from 1999 to 2004. During this time they had more fun than ever and the “Elvis” years were born. Don played Elvis for more than 18 years and was always a crowd favorite. He loved to make people laugh and have a good time. The last few years they served as Sambassadors and more recently; the last 10 years they served as Good Sam Club, South Regional Directors. They have traveled well over 100K miles, with plenty of side of the road stops for broken belts, blown tires, etc., but even with trouble, there was ALWAYS LAUGHTER. Don truly led a wonderful life and he will be sorely missed by all who knew and loved him.