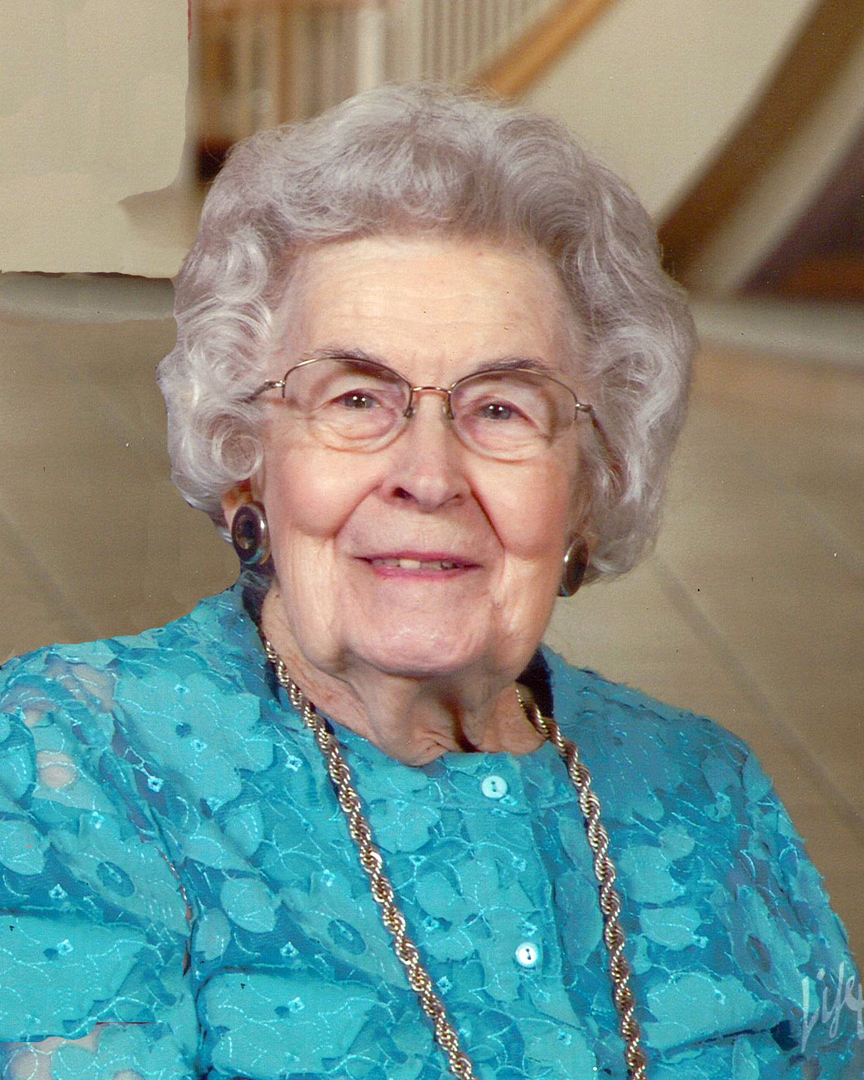 Betty Jean Goodknight, 94, passed away on Friday, July 6, 2018 in Arlington, TX. A Celebration of Life, is planned for July 27, 2018 at 10am in the Mason Chapel of Asbury Methodist Church, Tulsa, OK. Memorial services will also be held at Atria Senior Living, Arlington, TX at a date to be determined. Born Betty Jean Schnell, she came into this world on June 7, 1924, in Yates Center, KS, to John Henry and Lucy Jane Schnell. Betty was born in her parents' bedroom, as the town had no hospital. Betty's grandmother Effie Phillips helped raise her while John and Lucy worked and were active in Eastern Star and Masons. She went on to join Eastern Star as a lifetime member. After high school, Betty moved to Wichita, KS and attended business college while working at a dress store and later as a secretary at Aircraft Welders. She soon met John Victor Goodknight (Vic), a welder there, who said Betty was the “most beautiful girl in Yates Center.” “He talked me into getting married,” she recalled, and they wed on June 26, 1943. Vic volunteered for the Army Air Corps in 1943, while Betty worked at Boeing Aircraft as a secretary. The two moved together to Fresno, CA, where she worked at a winery for a few months before moving to Hastings, NE. After additional moves, and deployment to Iwo Jima, Vic was discharged from the Army Air Corps in 1946. The pair moved back to Yates Center, then to Wichita, where they welcomed their son, Craig, in 1949, and daughter, Vicki, in Atchison, KS, in 1955. The two settled in Tulsa, for 61 years, raising their children and multiple pets. Betty took great pride in keeping her home and yard with Vic, while cooking wonderful meals to fuel her family. She encouraged their two children to attend and graduate college; they both did with degrees in science fields, later having successful careers and children of their own. Betty was a devoted mother and Vic gives her full credit for raising their “perfect” children. She was a lifetime member of the Methodist Church and an active member of Asbury Methodist Church. Hobbies enjoyed by Betty included band and orchestra during her school years and singing in the Asbury senior choir. She loved cooking and baking, playing bridge, entertaining friends, collecting china, traveling and planting flowers; surprise lilies being her favorite. Betty held a great fondness for dogs, collecting hundreds of canine figurines. Even late in her life, Betty recalled her childhood cocker spaniel, Brownie. Surrounded by family, the two celebrated 75 years of marriage shortly before her passing. Betty is survived by her husband, John “Vic” Goodknight (97); children, Craig Goodknight and Vicki Dixon (son-in-law Steve Dixon); grandchildren Steven Goodknight (Shelley Carpenter), Mike Goodknight (wife Nicole), Lucinda Stoneberger (husband Brad) and Lauren Dixon; great-grandchildren, Mason and Zoe Goodknight, and Heidi, Cyrus and Henry Stoneberger; nieces JoAnn Teague and Carol Weirwich (husband Les); nephews LeRoy Goodknight (wife Kay), Howard Goodknight Jr; and Mike Fairchild. She is preceded in death by her parents, John Henry and Lucy Jane Schnell, along with other relatives and numerous friends she made during her long, fruitful life. Last year, Betty and Vic moved to Arlington, Texas, where they made connections with the staff and residents at Atria Senior Living. The family wishes to thank the staff of Atria and Legend (in Tulsa) for their compassionate care of Betty and Vic. In addition, a special thank you to their many neighbors and friends as well as Linda Walls and Carol West who have provided invaluable assistance and support. Remembrances may be left for the family on the Wade Family Funeral Home (Arlington, TX) website. In lieu of flowers, the family asks that donations be made to the Senior Adult Programming Fund at Asbury Methodist Church, Tulsa, OK.